A co-worker of mine at lululemon is a yoga instructor at Core Power Yoga and this morning she was teaching a yoga sculpt class that I have been hearing so much about.

Caitlin is known for her ball busting and hilarious personality during her classes.  She even memorizes everyone’s name so that she can call them out if they do something wrong. Apparently her awesomeness has really caught on because this class was packed mat-to-mat (even on a day where there was six inches of fresh snow and bad driving conditions!).

Before Caitlin even closed the door to the studio she was telling us to do 10 push-ups, followed by push-up pulses and then planks.  I think we repeated this four times and then moved into some flowing, followed by some intense cardio (who knew cardio on a yoga mat could be hard?) and rounded it out with powerful abdominal work. 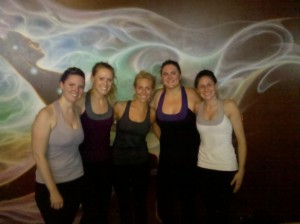 This was the hardest workout I have had since I started this challenge and I loved every second of it.  Before I even realized that I was slacking Caitlin was yelling my name or tapping a body part to remind me to shape-up.  At one point she even made a joke about me working harder to transform my no-butt into a real-butt.  Not only was it hard, but it was so much fun!  Three of my other co-workers were also in the class laughing and sweating with me.

I look forward to the day that I can get a membership to a gym that Caitlin owns and workout with her (or by the people she has personally trained) everyday.