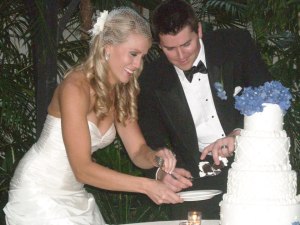 Day 320:  Oweee, hurricane Isaac was fierce!  Mike and I stayed inside all day and listened to the wind and rain.  Our honeymoon villa is situated on the top of a mountain and provided for some great storm watching, also a bit scary when you’re unfamiliar with the surroundings.  An hour of yoga flow helped and so did all of our attempts at getting in the hot tub.

Day 321: Mike and I had planned a four island tour on Wednesday and it was moved to Friday due to the weather conditions.  With the phone and internet down, we w 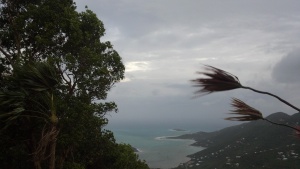 ere not sure if the boat trip was still going to go out.  We waited at the dock in St. John until we saw a little boat pull-up.  It was on!  The trip organizers told us once we were too far away from land to change our minds that this was the “roughest seas they have ever gone out in.”  YIKES.  Thank goodness we do not get motion sick!

We hiked for 2 miles doing the Baths tour at Virgin Gorda, snorkeled near Tortola’s coast for a short while before jellyfish slowly scared everyone out of the water and ended our day play 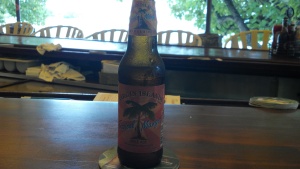 ing in the ocean at John Van Dyke in the British Virgin Islands.  Mike and I loved every second of it (minus the jellyfish!) and ended up being thankful that the sun wasn’t out to add more heat to the day.

It also inspired me to start a new blog once we return home, more on that to come  🙂

Day 322:  Yesterday morning Mike went scuba diving and I explored St. John some more.  After his scubaing was done we decid 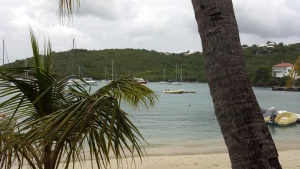 ed to try out some of the only beaches we had not hit just on the island just yet.  We ended up hiking over an hour to get these beautiful bays and rewarded ourselves with playing in the ocean and homemade PBJ’s.

Although the hurricane has passed us in the Virgin Islands, it is now sadly expected to hit the main US.  We are hoping that it slows down and does not cause much damage.  In the meantime, our flight was delayed four days and we are going to hop over to stay in St. Thomas for a change of scenery and sweats. 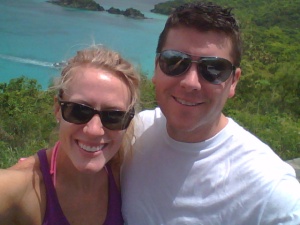 Days 315-318: Typically I do not lump together workouts, however I think that I can make an exception for our honeymoon week!  Right now we are in St. John, overlooking the tropical green mountains and the light blue ocean.  It is honeymoon heaven, regardless of the fact that hurricane Isaac is right outside our door and cutting into our outside play time. 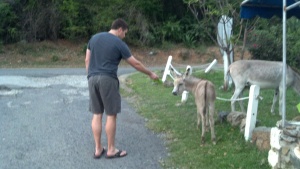 We chose this island for our honeymoon because it is a huge playground for hiking, snorkeling, beaches and apparently, wild animals.  Everyday we have been here has been filled with hikes to remote beaches for snorkeling, hikes to snag a view of something beautiful, swimming in the clear water and trying to chase down sea tur 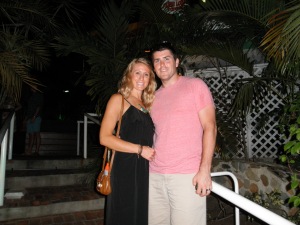 tles or sting rays.  Although it’s all been natures workouts, they have been more fun than anything at a gym or studio I have done in the last year.   It has made us realize that active vacations are definitely what we will be seeking out in the future.

Today is the day that Isaac is going to effect us the most, so I will roll out my yoga mat and flow away ion our d 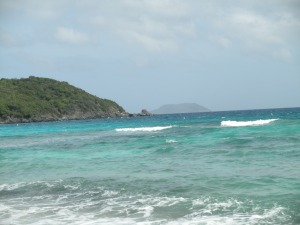 eck in between sets of storms.

If you do not hear from me again, I will be breaking from the blog and enjoying the experience as much as I can while working in some sweat sessions.  I do have a huge favor to ask of Mother Nature, could she help us out and give us some sun the last few days?  Our newly obsessed beach going selves would be greatly appreciative!