Washington Park and in Cherry Creek.

Day 221:  One hour of some home-made yoga flowing in my living room to help loosen me up for the half-marathon today.

Day 222:  Today I got up at 4:15 a.m. to make it to the starting line for the Colfax Half-Marathon at City Park.  It was only 43 degrees when I approached the starting line, but with so much going on around me I was able to quickly forget about the chilled air. 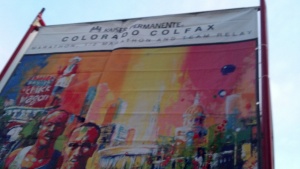 a.m. and within three minutes of running my IT band started getting sore.  Luckily, it stayed only semi-sore the whole race and did not worsen as the miles added up.  The first six miles were on Colfax Avenue and to say that it was amusing is an understatement.  Awesome signs, great people watching, slightly scary abandoned buildings, odd smells and hilarious things being yelled by the spectators.   At mile seven the runners ran through a firehouse and the firemen were lined up to give us all high-fives.  A girls dream, right?  After that, I had a small epiphany that running is such a solitary spo 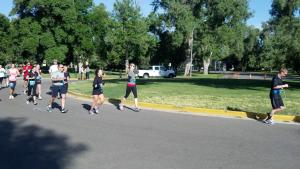 rt, that it felt great to have some human contact along the way.  After the firemen, I decided to give every spectator with their hand out an overwhelming high-five.  Looking back, it might have added on a little time by zigzagging across the course to hit hands, but it was worth it for the amount excess energy it game me.

Throughout the race, I ran into a few different friends that were also running, which made me feel a sense of community and connection.  My favorite part of the race was at mile 12 when I turned a corner in City Pa

rk to see my fiance waiting with his camera.  It roused up the past bit of strength that I needed to finish the race.  I did not hit my goal time of under two hours, however, I am still proud that I finished with my knee feeling so weak.  I am already so excited to complete this race again next year with Mike, to train properly so that my knee feels better and to reach a new time goal.  Thanks to everyone who supported me throughout the racing season and I am sending you lots of running love as I am sure, you are about to head into your own summer running season.  May your knees stay strong and your body healthy!