Day 240:  On Thursday my friend Emma from Pennsylvania was in town and we went for an hour-long walk in Washington Park before picking up four more friends at the airport.

Packing for Betsy’s bachelorette party was a bit like packing for a boot camp taking place during spring break.  I found that the quantity of luon and workout clothes in my suitcase was equal to the quantity of “real clothes” but a girl’s gotta be prepared for whatever the bride-to-be had in store.

Thursday night’s marathon, always-happy-hour at the Ruby Tuesdays near the airport made me think that for a moment maybe, just maybe, Betsy would go for a weekend of full indulgence and count aggressive and enthusiastic eating as a workout.  She proved me wrong at 7 am Friday morning as us East-coasters were stirring from 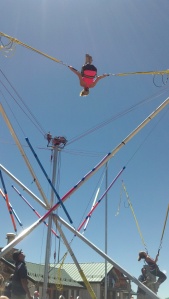 the jet lag and she was confirming our workout for the day.  We went to a class at Core Power yoga which, although not very strenuous, proved to be the perfect medicine to cure whatever altitude/jet lag struggles were underway. After the class we quickly plowed into our weekend! Little did we know that marathon walks, hiking, flips on a trampoline at 10,000 feet, laughing until our abs ached, and some very skilled (sarcasm) dancing would fill the rest of the weekend.  It was the perfect mix to celebrate Betsy!

hate working out.  I know that, for a lot of people, it’s not the highlight of their day but those people say things like “I feel so good when I’m done” and “I have so much energy”….. not me.  Even on the way out of the gym, I’m just waiting for someone to make my day.

But, there are few things that I wouldn’t do for Betsy so I threw on my favorite TV watching, er, I mean workout pants, skipped the sunscreen (epic fail) and tried to chug water to balance the bottle of wine I drank the night before…. and the bottle of champagne.

This was the plan…. Walk to the gondola, take the gondola up, do a “20 min hike/walk” around at the top and then walk down.  I was looking forward to doing a nice tuck and roll down the moun

Here is what really happened:  We walked an hour to the gondola (I think this actually should have qualified as a workout but….), we did ride it up (although even sitting there got me winded… blame it on the altitude) and then we hiked at the top.  It wasn’t very far (maybe a mile round trip) but it was steep and the gaggle of gals I was with weighed in at about 500 pounds cumulatively and were all in great shape.  I mostly walked by myself so everyone couldn’t hear me hyperventilating and only stopped when there was so much dust blowing at me that I thought I was having an asthma attack (sidenote: I don’t have asthma). 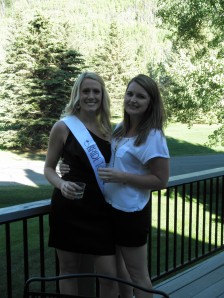 included and, judging by her breathing, that was more of a workout than the hike.  I’d just eaten $21 worth of concessions food so I opted out of the trampoline for obvious reasons.

And, although not part of the official workout for the day, Betsy and I danced like we legit had the moves like Jagger for most of the night.  I know this because that is what I texted to my boyfriend at least 3 times that night.  He also got a picture of an elephant.  No pictures of that workout are allowed to be posted though.

Overall, I was definitely sweating and didn’t smell great so it counts as a successful workout!

Day 243:  After we all proved that we had moves like Jagger, surprisingly, I was not feeling too hot.  Seven of the thirteen girls left that day and the remaining six went to Washington Park for another hour-long stroll.

Day 244: Yesterday I squeezed in a quick 30 minute run after I dropped off my last few friends at the airport.  It took every ounce of energy in me to complete after the best (and the most inappropriate) weekend of my adult life.

Day 245: With my body still on the mend from dancing for two days straight with three-inch heels on, I decided to take it easy and do a home yoga flow.  Perhaps I’ll be healed by tomorrow.

rado Rockies Opening Day!!   Mike and I walked about five miles on Monday to pick up a friend (to walk further with us), then walked to meet other buddies, next to the stadium and lastly, a half-mile until we found our final cab that took us home for the night.  My feet were covered in filthy happiness.

Day 182:  Half-way through and guess what?  I forgot 😦   I did not forget to workout, but I forgot to make it a special workout to signify how far I have 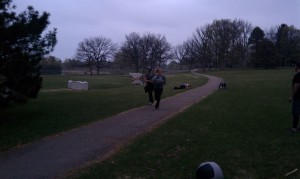 come. Mike and I spent the majority of our day house hunting and our minds were full of house owning dreams, confusing floor plans, mortgage fears, remodeling ideas and lots of other confusing things to first time home buyers.  Exhausted from our day, we decided to walk together for an hour hand-in-hand  while discussing our best options.  On second thought, I’m not sure if I would redo this workout in any other way.

Day 183:  This morning I went to a crossfit bootcamp at Washington Park at 6 a.m.  For those of you who have been following me for awhile, you know that those early morning classes do not happe

n often.   One of my friends talked me into making the commitment and I could not let her down.  We warmed up with what alone would have been the hardest workout I have had in months: Indian Runs.   After that there were lots of burpees (youtube it, I can’t even begin to explain that one), air squats, kettle-bell swings and sprinting.  It was brutal and awesome rolled into one.  Here is the link if you’re interested in checking out this early a.m. butt-kicking with Crossfit Stapleton:  http://crossfitstapleton.com/stapleton-bootcamps/

Lastly, I wanted to share with you something that has the potential to change a lot of lives.  My fiance and I watched “Fat, Sick and Nearly Dead,” a documentary on the benefits of juicing and eating a healthy diet.

Click here to watch the free movie on hulu

Afterwards we both looked at each other and said, “we have to do this.”   Many hours of research later we decided to get the Vitam

ix 500 and start our 10 day juicing challenge tomorrow.  It’s going to be tough in so many ways and we are fully prepared for what is going to happen to our detoxifying bodies.  Actually, scratch that, I am not prepared.  However, I am dedicated and excited to see how this challenge changes my relationship with food.  Don’t you worry, I’ll be sharing our experience along the way.

If you see me around and I look quite angry, please forgive me.  I will be blaming my tude’ on the all liquid diet.  Here we go!

Day 158:  3 mile walk with a friend in Washington Park

As the weather gets warmer, my legs grow antsy for a consistent running season.  My running goals have remained unmet and the same for years.  This year, with the combination of the blog, our wedding and a fast running fiance; I meet my goals.   Please excuse any repetition in declaring my goals, it just helps me solidify the importance of them in my life:

There they are, plain and simple.  What are your goals for this upcoming season?  Whatever they are, make them attainable, fun and give yourself lots of loving rewards along the way.  Want some support?   Enroll your friends, family and make public declarations of what you want to achieve.  You can do it, I guarantee you that…now you guarantee yourself the same thing!

Day 95:  Yesterday it was 1 degree in Columbus, OH.  To say that it was cold is an understatement.  Every single time I walked outside I annoyed myself by saying “BBBBBRRRRR, IT’S FREEZING OUT HERE.”   After nine hours of errand running all over town, that line got old quickly.  Needless to say, we would not be using the outdoors as our gym.  We started calling the local gyms to check on reasonable drop-in rates and stumbled upon the gem called the “YMCA.”  Have you heard of it?   Seriously, those places get overlooked and given a bad-wrap.

The one we went to gave us a free three-day trial, free sweat towels and an endless amount of grunting coming from the nearby highschool power lifters.  Besides the occasional startled feeling from the aforementioned grunting, it was a great experience.  I ran my first 8 minute mile (maybe ever?) and got in some lifting time.  Oh and the sweat was complimentary too!  I am a sucker for anything that’s on the house…

Day 96:  It has been snowing in Ohio for 48 hours straight with only an inch of  accumulation.  I am still confused about how that can eve

n happen, but leave it to the high-winds in corn country to make that possible.

I have a darling cousin, Ellen, who works at a uber nice gym called Urban Active.  We dropped in for a workout today to squeeze in some family sweatin’ time.  I did about 45 minutes of mixed up cardio and ended my workout with 10 minutes of ab work.  Between the family, friends, wedding planning, moving, welcoming home and hugs, this week has proved to be the most difficult week of the challenge so far.  However, by continuing to put my health first (amidst the craziness) I have been able to calm my nerves, eat out meals with the family without stress of weight gain and carve out some me/us time.  All of which, I know I would not have done if I was not committed to this challenge.

When I was in middle school I watched “Singled Out” like it was my job.  Once there was this beautiful girl on there with six-pack abs that said, “I do 500 crunches a day to get my stomach to look like this.”  My little 12-year-old prepubescent belly chub was enchanted.  I did 500 crunches for a week and then I gave up.  I didn’t have a six-pack, or boobs or long tan legs.  What was a teenybopper with a shag bob and braces to do?

Luckily, I had a brother in high school that I emulated.  He was honing in on his rowing skills in our basement ergometer and taught me how to do the same. 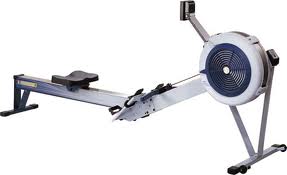 He went on to row in college with men who all looked like 6’8″ Greek Gods*, while I continued to hit up the ergometer whenever all the other machines at the gym were taken.

You’re probably wondering why any of this is relevant.  Well I am at my Dad’s house in Mendon, NY for my cousins wedding this weekend and it’s raining outside.  Thus, I had to workout in my Dad’s basement which is stocked with all sorts of exercise equipment. I chose the ergometer.  I rowed 5,000 meters and did 500 crunches while listening to Whitney Houston on repeat (OHH!  I wanna dance with somebody…).  It’s a good thing that Mike put a ring on it, because otherwise those casting directors from Singled Out would be hunting me DOWN!  Well, maybe in 354 days…

*I wanted to include a picture of my bro and his college crew team to prove my point, but his non-facebook committing self would probably not approve.