Day 358:  I don’t know about you, but I am one of those people who will not leave my house after a move until everything is in perfect ord

er.  Does that sound crazy?  I have kind of felt that way the past few days.  It probably did not help that the only time I left the house was to go on a daily run to Wal-Mart.

I knew that the only way I was going to feel better was by exploring my new neighborhood.  The reason we chose this hood’ over other suburb hoods’ is because of the beautiful reservoir just 1/2 mile down the street.  I hopped on my bike and completed the 8 mile loop around while taking in some of the most breathtaking views and loads of cool animals.  I tried to get pictures of the deer and antelope that I kept seeing, but they blend in so well with their

surroundings that they did not show up (which is surprising because I used my fancy camera phone!).

There was also the feeling of relief when I came across runners, bikers, scuba divers getting certified, paddle boarders, kayakers and people just sitting in nature.  It was a sense that I had found home in a place that I had never been before. 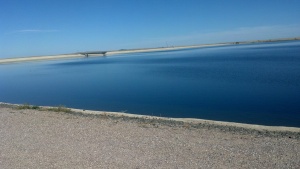 Day 359:  The only downside that I’ve found with moving to the suburbs is that I have to drive EVERYWHERE!  I have not had to do that since I graduated high school 5 years ago…or 11 years ago.  Its definitely going to take some adjusting.  Although listening to Matisyahu really loud and singing/screaming really helps speed up travel time.  The point of this driving madness is that I have to drive 15 minutes to get to a gym. That seemed semi-ridiculous to me until I stumbled upon the Wal-Mart sized Lifetime Fitness.  The mandatory tour took 25 minutes and then membership director dropped me off in a peaceful yoga studio for an hour-long hot vinyasa flow.  After that, I hit the treadmill for a

15 minute run and then came home.

The gym has so much to offer that my city gal pint-sized gym self was so overwhelmed.  It’s a big commitment to join a gym and an even bigger one to join a scary mammoth sized gym 15 minutes away.  Until I have to decide on a gym, I think I’ll stick to a routine that includes trips to the reservoir for runs or rides and throw in some trips to Denver to for my yoga fix.  Don’t mind if I do….